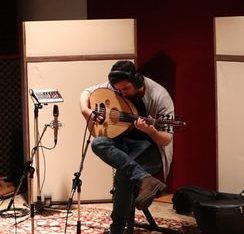 We wish you a new year as happy as possible in the current circumstances. But the light of spring is in sight, and so we are carrying on, and invite you to try with us to find positive aspects resulting from things as usual being impossible. One thing that Covid-19 and ensuing regulations made impossible was the [zait wa: zaʕtar] Festival’s concert with Bakr Khleifi on Oud and Roshanak Rafani on Tombak, planned as a Christmas concert for this past December.
But postponed is not abandoned – there will be a real live concert at the end of the [zait wa: zaʕtar] Festival.
And for now, as a New Year’s greeting for you, we did produce a talk-cum-concert with Bakr Khleifi solo. Bakr answers some questions asked by the Ibn Rushd Chairwoman Cora Josting, and, of course, plays the oud.

Born in 1991, Bakr started his music education at the age of 4. When he was 6 years old, he started learning the Oud with renowned Oud player Ahmad al-Khatib. Throughout the years, he learned with several Oud teachers, including Samir Jubran of the Trio Jubran and Simon Shaheen.
Bakr is also a Double Bass player and has played with Daniel Barenboim’s and Edward Said’s Orchestra, the West-Eastern Divan. His study of both Maqamic music and Western Classical music has shifted him towards composing music that is influenced by both these musical disciplines.