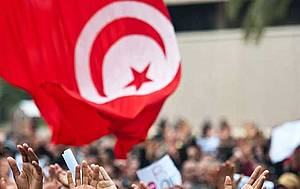 Signs of a new spring or an alarm of uncertainty?

It has now been nine years since the flight of long-time President Zine al-Abidine Ben Ali on January 14, 2011, which triggered the revolutions in many Arab countries, and were later called the ‘Arab Spring’.

This anniversary serves as an occasion for a panel discussion with activists and representatives from politics and science, organized on 18th January 2020 in Berlin, by the Deutsch-maghrebinisches Institute for Culture and Media (MagDe) in cooperation with the Ibn Rushd Fund for Freedom of Thought eV.

What happened in Tunisia so far since the revolution, which developments are positive, what needs to be improved, how the relations with Europe have developed, does Europe sufficiently take its position as a partner, and are democratic forces duly supported?

How do the turbulent neighborhood and volatile US policies affect the young democracy in Tunisia?
These are just part of the questions that are under discussion. Questions and contributions to the discussion from the audience are particularly welcome in the second part of the panel discussion, which will be rounded off with a musical contribution and a Tunisian buffet offered by the Tunisian embassy in Berlin.

Participants in the panel discussion:

In addition, other prominent figures and activists from the Tunisian side were asked for brief contributions, as well as experts and members of Bundestag from the German side.

The Ambassador of the Republic of Tunisia, Mr. Ahmed Chafra will also be present.

The moderator in German and Arabic will be Dr. Sarhan Dhouib, Institute of Philosophy, University of Hildesheim.