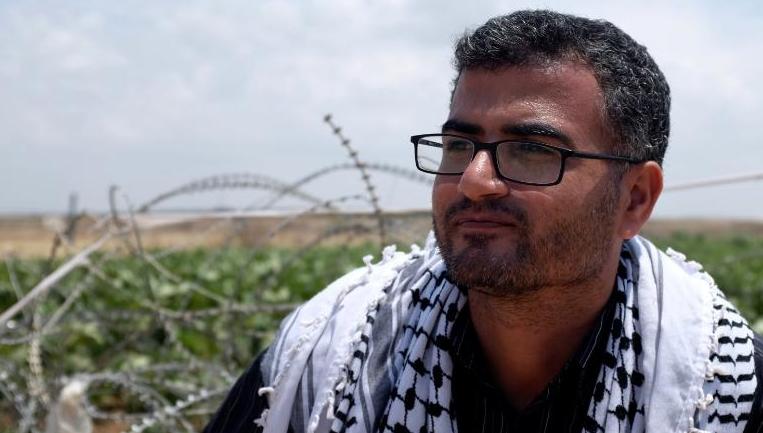 Sovereignty, the Subject and Life under Siege & what led him to initiate the Great Return March

Dear friends of Freedom of Thought, in the Arab World and elsewhere,

“How does it feel having to live in Gaza, a place that offers no future prospects?”, was the question we asked earlier this year. We tried to find some answers to this question through a collective reading of texts written by authors and poets residing in Gaza, in an Ibn Rushd Lecture taking place on March 30, the first anniversary of the Great Return March.

We are now seizing the opportunity of the independent Palestinian journalist Ahmed Abu Artema traveling through Europe to speak about Gaza, the situation in general and his life in particular. How did the combination of both lead him to become an organizer of the Great Return March, and why did so very many Gazans decide to join the enterprise of walking towards the border which they are forbidden to cross, are some of the questions Ahmed will look into in his talk in Berlin.

The Gaza Strip – an area of only 365 km² where nearly two million Palestinians live, estimated already in 2016 to be the world’s most densely populated area with 5154 people per km². For more than ten years, the Gaza Strip has been under a blockade and cut off from the outside world both on land and at sea. Not only are the people living there barred from leaving, but also are basic necessities prevented from being brought in – medicine, raw materials/commodities and construction materials, all of which would be, after three devastating wars in only six years, urgently needed for reconstruction. The United Nations consider the Gaza Strip uninhabitable.

Ahmed Abu Artema has been published in numerable newspapers and magazines. His texts can be read in English in several U.S. publications such as The New York Times, The Nation, and the Journal of Palestine Studies. In 2018 he was featured in a documentary film by Karim Shah produced by Al Jazeera news network, “Gaza: Between Fire and Sea.” Ahmed also authored a book in Arabic called “Organized Chaos” and contributed to several documentaries, including the Al Jazeera film “Which Rafah Are You From?” about the tragic separation of the city of Rafah following the Camp David Accords and its impact of displacing thousands of families.
The Abu Artema family was expelled from their home in the Ramle district in 1948, and Ahmed was born in 1984 in Rafah, Gaza; his family was once again one of those displaced when Rafah was split. Ahmed lives with his wife and four children in Gaza.

As a writer and an activist, Ahmed Abu Artema believes in civil nonviolent struggle to achieve justice, freedom, and equality.

Event in English. Questions and contributions to the discussion following the lecture are also possible in Arabic and German, we will translate as best as we can.
In cooperation with the Jewish Voice for a Just Peace in the Middle East and the initiative ‘Palestine Speaks’.

The entrance is free, but donations contributing to covering the costs are encouraged.