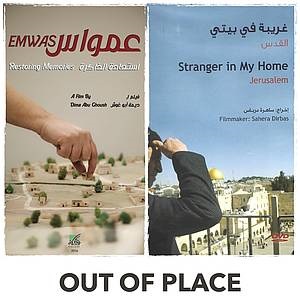 Dear friends of freedom of thought, in the Arab World and elsewhere,

Roots are at the base of everyone’s identity, and the need to know one’s roots plays a central part in the construction of an identity. What is the truth about where I come from, who are my ancestors and where did they live, what’s my people’s history, how did all this shape me in the past and continues to do so in the present?

To assume an active role in this creation of a personal as well as a collective selfhood, to find out the truth necessary for (re)constructing a memory and an identity, we need to go places, both real and imaginary ones, and to talk – to inner circles, and sometimes to strangers, too; especially if we are removed from what our collective history once was, or live far away from it. This is almost commonplace knowledge since at least Alex Hailey‘s famous novel later turned into a TV-miniseries, and named just after that central idea: Roots.

Palestinians often don’t have to travel as far in search of their roots as Hailey had to, but gaining access to places that may have even have ceased to exist can be just as great a challenge; and, maybe even more so, is talking to people today present in places which are, in one’s (collective) memory, still inhabited by those only alive in that memory.

Both Dima Abu Ghoush and Sahera Dirbas went on this quest of reconstructing a both personal and collective identity, which they document in their films Emwas and Stranger in My Home, to beshown in a double feature on June 19 in Moviemento-cinema in Berlin. The filmmaker and director Sahera Dirbas will be present for the screening, which will be followed by a small reception.

Films in Arabic with English subtitles

Emwas
The film follows the director Dima Abu Ghoush’s journey back to the place her family once came from. In fact she herself was born in this place, the Palestinian village Emwas, which was destroyed in and after the 1967 war and which she was forced to leave at the age of two. Today, there is a public parc on the ground where the village once was, so Abu Ghoush decided to rebuild it the only possible way – she constructs it in the form of a maquette (model) according to the stories she’d been told all her life, filling the gaps in this passed-on-memory that is oral history with the help of family and friends. Together, they manage to bring the destructed place back to life through the memories they share and that live on as a dream of returning.

Dima Abu Ghoush
is a Palestinian writer and filmmaker based in Palestine. She started as a short story writer, and worked as a teacher of English literature and translator before turning to filmmaking. She received her MA degree in Film and TV Production from the University of Bristol and worked as a freelance director and producer and made several short films before co-founding Collage Productions in 2005, an independent production house based in Palestine. Dima made several documentaries, like GOOD MORNING QALQILIA, MY PALESTINE, HAMORABI, FIRST LOVE, some of which were selected for film festivals or screened on Arab and European TVs. Her latest film “Emwas – Restoring Memories” won several prizes, and continues to be shown in festivals around the world.

Stranger in My Home
The story of eight Palestinians revisiting their past. All eight families had to flee their homes in Jerusalem due to the war of 1967. Forty years later, they go back to visit the places where their families once lived. In the process, they re-discover memories of what happened back then, and meet the people, strangers to them, who are now living in the houses they were dispossessed of after the war but which keep on belonging to their memories.
The award-winning film directed by Dirbas, who was born in Haifa and lives in Jerusalem, has been screened at cinematheques in Israel and abroad.

Sahera Dirbas
graduated in Practical chemical Engineering from Handasaem College Technion Haifa in 1987 but turned to filmmaking 2006. She later worked as a freelance producer for news and documentary, mainly with Rai-uno-due-tre, the BBC and other international TV stations.
For 25 years now, Sahera has also been a researcher of Palestinian oral history, and, in 2012/13 taught “Audiovisual Documentary Research”, training 15 Palestinian women in the West Bank in Audiovisual Production on Women’s Narrative and Memory in Palestine. In 2016/17, she worked as a project instructor of “Reel Stories” a project between Palestinian Heritage Museum and the Jerusalem and Arab American Museum, Detroit, USA, aiming at empowering young women through filmmaking.
Her film On the Doorstep (2018) won a special mention by the jury of the 5th Palestine Cinema Days 2018. Other films were Silence (2017), Between Heaven and Earth (2015) and Sumud. Three TV spots focusing on No Violence against Women (2013), and Deir Yassin Village and Massacre (2012), Jerusalem Bride (2010), Stranger in my Home (2009), 138 Pounds in my Pocket (2009), and A Handful of Earth (2008)
All films participated in international festivals in Europe and US and Middle East.