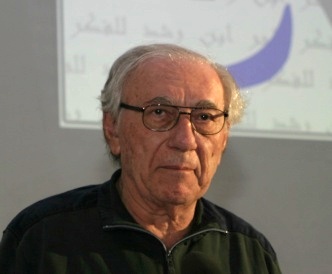 he lived most of his life in his home land, but his work was effective in the entire Arab world … he died secluded in exile in Berlin where he lived the last few years of his life.

Sadiq Jalal al-Azm is considered as one of the pioneers of Arab Modernism and an outstanding scholar of critical thought in the Arab world.
Al-Azm achieved great fame in 1968 and 1969 with the publishing of his works “Self-criticism after the defeat” and “Critique of Religious Thought”, in which he radically attacked central dogmas of political and religious-cultural discourse within Arab society. This book, and his essay “Satan’s Tragedy”, published previously in 1965, in which he challenged the traditional Islamic understanding of God’s responsibility for evil, led to a fatwa pronounced by the local mufti, which found him guilty of apostasy and which caused a stir within religious and academic circles. His book “Self-criticism after the defeat”, in which he analysed the state of the Arab world after the 1967 Six-Day War, is considered one of the most controversial writings in Arab political thought. Azm called for a radical modernization based on the secularization of Arab society. Many of his writings were banned in several Arab countries.
He was a free spirit, and a respected intellectual who gained much attention worldwide. When the Arab Spring broke out, al-Azm declared his support hoping that a new generation would emerge that would break the circle of inheritance of power. He supported the Syrian revolution, in contrast to many leftists, who saw in Islamism and its militias too great a danger. He called it the “unmasking” revolution.

He was a much appreciated friend, and a wise man, great in his modesty. He was known for his intellectual debates which resulted in many enemies for him. However, he was undeterred and remained faithful to his beliefs to the end of his life. He fearlessly and steadfastly held on to his belief that secularism is the only functioning social system at a time when it was highly doubted. He dealt freely and confidently with prohibited and taboo subjects, and his books shaped the thinking of many generations.

On February 10th, 2017 in Berlin in the Festsaal of Berlin’s main city hall Rotes Rathaus The Ibn Rushd Fund and the Sadiq al-Azm Foundation for Culture and Education – – with support of Prince Claus Fund and Heinrich Böll Foundation – hosted a memorial event for Prof. Sadiq Jalal al-Azm, who passed away on December 11th, 2016 after a short but grave illness.
Numerous contributors – took part in the event to celebrate Freedom of Thought with us and the great Syrian philosopher as its outstanding representative. Ever since the foundation of the Ibn Rushd Fund, Prof. Sadiq Jalal al-Azm supported the Ibn Rushd Fund with advice, gave lectures, and in 2012 accepted the Ibn Rushd Prize for Freedom of Thought on behalf of the Syrian activist Razan Zaitouneh. With this memorial event we wanted to remember the great thinker and the wonderful human being, whose magnanimity was in no way second to his intellectual merits.
Contributors were for example Eman Chaker al-Azm (Syria),  Sumaya al-Azm (Syria), Prof. Werner Ende (Germany),  Dr. Ivan al-Azm (Syria), Dr. Carsten Wieland (Germany) and Prof. Khaled Hroub (Palestine),   Nabil Bushnaq and  Fatina Foda (Palestine) amongst the speakers, and musical contributions by Nasir Chamma (Oud, Irak), Catherine Le Corre (vocals, France) and Özgür Ersoy (Turkey) accompanied by Ziad Hakim (Syria) at the grand piano, Bachar Zarkan (vocals & oud, Syria) and the women’s choir Hanin (Syria).

You can also watch video cuts.

We hope you enjoy reading