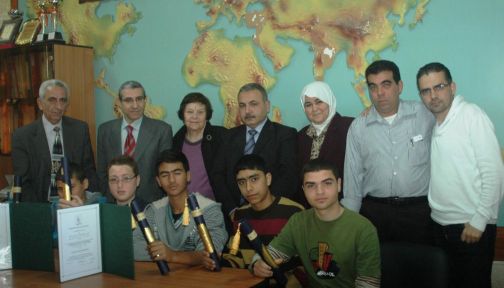 Description of the project, see below.

On Monday 25th March 2013 the Ibn Rushd Fund for Freedom of Thought has awarded the young editorial team of the school magazine “al-Ghusn” of Hilmi Hanoun School in Tulkarm/Palestine the Ibn Rushd Prize for School Journalism 2013 in recognition of their efforts to critically interact with their environment, their recognition of social problems and active participation in free and public debate.
The four magazines of all competitors (four competing groups of pupils – two from Al-Omariya Girls School and two from Helmi Hanoun High Basic Boys School in Tulkarm/Palestine) will be published in next issue of Minbar (online magazine of the Ibn Rushd Fund).
At the award celecration on Monday 25th March 2013 the Ibn Rushd Fund was represented by the members Nabila Bushnaq and Dr. Imad al-Sadr, who handed out the certificates, along with representatives of the ministry of education and Helmi Hanoun School. The winning young journalists (editors of “al-Ghusn” magazine) are: Faris al-Jamal, Muhamed Tammam, Mohamed Najjar, Fathi az-Zuqla, Abdul Rahman al-Qaisi.

Description of the project

Young journalists was a press competition project for pupils of from each one boys and one girls school in Tulkarem – Palestine A joint work between the Palestinian Ministry of Education and the Ibn Rushd Foundation for Free Thought.

This is to activate the student’s relationship with problems in their environment and to discuss them completely freely. The competition took place for a period of three months, during which students participating had to go to libraries and the Internet in search for sources of news.

reporting on the project in Minbar Ibn Rushd

Each group issues a school magazine that includes its topics in the largest part, a problem of the society in which the student lives, to explain and discuss it completely freely. At the end of the three months, the groups send their work to the Ibn Rushd Foundation for Free Thought for consideration by a specialized committee. The Foundation has publish the best of these topics in the Ibn Rushd electronic magazine Minbar Ibn Rushd.