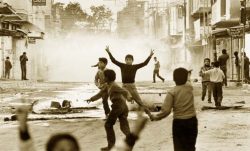 “Without the Palestinians, Palestine dies. Her rivers are poisoned, the sources dry out, the hills and valleys disfigured, her fields are worked by imported Chinese, while her sons are imprisoned in ghettos.” Israel Shamir.

My name is Rafi. I am an American Israeli and a former member of the IDF or Israeli Defense Force. To say the least, I am shocked about how violent our society has become, especially since the latest Palestinian uprising.

Somehow we have convinced the world and even ourselves that we are the victims of violence, but in truth, we are the perpetrators. Yes, at one time, we suffered from discrimination and hate. We lived in ghettos and we were shamed by our Jewishness. Because of the suffering of generations of European Jews, some of us wanted a homeland where we would no longer have to live in shame or fear acts of hatred against us simply because we happened to be Jews.
Our very conception was wrong. We picked a land that was already inhabited by a native people. Through the use of terror, liquidation, and brute force, we coerced these peaceful people to flee their homes and to either settle as refugees in that land which we had not yet confiscated from them, or in neighboring Arab countries.

After the Holocaust, we were unwanted refugees and it was due to this fact and also in order for America to gain a foothold in the Middle East through us, that we were able to gather weapons, and military support from Britain and America. Even though most of us were able to return to our former European homes after World War II, we chose to conquer and occupy the land and homes of another people who had been living in their own country for thousands of years.
We told the world that we were the rightful owners and we devised so many falsehoods and distorted history to such an extent that we began to believe ourselves. We have always stood for freedom as long as it was Jewish freedom. We have always supported human rights as long as those rights were Jewish human rights. We claim to have the only democracy in the Middle East, though our democracy is for Jews only and through subtle use of religion, we exclude all who are not Jews from our government we claim to be by and for the people.
When the outraged Palestinians lynched two of our undercover agents in Ramallah, we called them criminals and savages. But what I saw on the streets of Beit Hadassah defies all savagery.

On January 12, Shaker, a young Palestinian man, was chased by soldiers from the IDF through the streets of Jerusalem. Jerusalem is holy to Jews, Christians and Muslims. It is a city wind worn, people torn, and a place where the prophets of the three great monotheistic faiths once walked. But what I saw was neither holy nor righteous. What I saw was our soldiers sadistically dragging the body of the not yet dead young man through the streets of Jerusalem as they laughed.
The body was dragged to our own part of the city, Beit Hadassah, where some Jewish settlers rejoiced at the blood gushing forth from his stricken body and as he gasped his last breath, these same settlers sang, danced, passed out candy and shouted congratulations to one another. I was reminded of cheetahs and hyenas that kill and drag their prey. But these animals kill to survive; they do not kill for pleasure. Our soldiers, on the other hand, kill to maintain an apartheid system. And unlike the cheetahs and hyenas, they rejoice and celebrate the death of the Palestinian fallen. I fail to see anything civilized or heroic about the way this young man was slaughtered. Had he been a lamb, we would have protested in indignation had he been treated in such a manner.
I wish that the savagery ended here. But it did not. Some of the Israelis crushed our victim’s skull in, gouged out his eyes and cut off his nose. Though the dead do not feel pain, what was done to this poor young man defies all reason and is the most grotesque and savage thing I have yet to hear of.
I am sorry that Shaker was butchered in such an inhuman way. Those responsible for the manner in which he was killed should be charged and brought to trial. Those of us who laughed, sang, danced and passed out candy while he still showed signs of life should bury our heads in shame. We are guilty of crimes against humanity and if we continue on such a path of self-destruction, we will have no more humanity left within us. We, the victims of a long ago Holocaust, have created the new Palestinian Holocaust. It is high time we stop butchering the innocents, shed our masks of feigned abuse by a weaponless people, and take a long hard look at what we have become.
As long as we are dishonest with the world and ourselves, we will never achieve peace.
The image of this stricken young man and how he was dragged through the streets, kicked and jeered at while he was yet alive, haunt me. Even worse, the way he was mutilated after he died, even further sicken me. God help us all for what we have done and for what we are doing.